When did they start this procedure? How long has it been around? 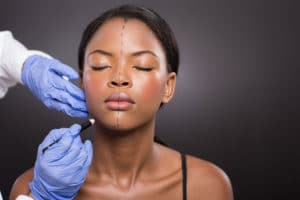 “During the 1950s several varieties of chin implants composed of different materials were developed.” Since their initial use, alloplastic chin implants have been made of a variety of materials and in numerous shapes. Some of the earliest implants were short and shaped like an extended oval. They were designed for placement on the central chin, a concept that was flawed. Except in a limited number of circumstances, these implants produced an oddly pointed chin shape. In more recent times, they have been replaced by anatomic implants, which were created and developed by Ed Terino before their introduction by a commercial company. These more closely resemble the shape and dimensions of the chin and extend from just beyond the mental nerve on each side. Initial placement of the implant extraperiosteally evolved to the more satisfactory subperiosteal placement. Eppley states, “Alloplastic materials offer the potential for ‘off-the-shelf’ solutions to reconstructive tissue needs which avoid donor scars and morbidity and typically simplify the procedure in terms of time and complexity of technique.” As more and improved injectable implant materials, including permanent injectable implants, are developed, they should be considered in the armamentarium of the aesthetic plastic surgeon.

What is this procedure?

Chin Augmentation or Mentoplasty is a type of plastic surgery performed to reshape or increase the size of the chin, so that the appearance of the face is balanced . Implantation is performed to add volume to the chin, whereas bone reshaping is done to reduce the size of the chin. It can be used to correct Microgenia, if the person has a normal bite. It is usually performed with rhinoplasty (nose job) and facial liposuction, to achieve the desired facial proportion. Typically performed as an outpatient surgery, Chin Augmentation takes a few hours to be performed. The bandages and stitches are usually removed within a week. A chin augmentation enhances the size of the chin by either placing an implant or adjusting the facial bones. It can also correct any deformity in the skin, birth defects and defects caused due to accidents. The procedure is an easy one and can produce noticeable changes in the chin

Who needs this procedure?

The procedure is most commonly sought by those who have experienced facial trauma, those who were born with certain facial defects and those who have experienced bone restoration due to aging, which has caused their faces to appear gaunt.  Most people who are unhappy with the way their chin looks can be prospective clients for the procedure. However a few points regarding the outcomes of the procedure required to be taken into consideration. Some patients who opt for a mentoplasty either to get their chins enhanced or reduced. In rare instances, people have congenital malformations of the chin. In such situations the resulting facial asymmetry makes the patient seek out a genioplasty to correct the underlying condition. In some cases augmentations are sought after as a fix for the after effects of trauma. People who decide to have a gender reassignment surgery sometimes undergo a mentoplasty as a part of the transition process.

What is the advantage of this procedure?

Chin augmentation adds proportion to the chin and provides balance to other facial features. A weak chin makes the neck appear fleshy. It accentuates the size of a normal nose and makes a large nose seem especially big. Chin enlargement through chin implant surgery brings the facial features into harmony and balances the overall facial structure. If you are bothered by your recessed or “weak” chin, or you feel your facial features lack proportion, chin implant surgery can help you feel more confident in your appearance. Specifically, chin augmentation can: Improve facial harmony by bringing chin into better proportion with other features,Correct a weak or recessed chin,Improve definition of the neck and jawline,Help reduce the appearance of a full or “double” chin caused by a small chin bone.

Are there non-surgical treatments? 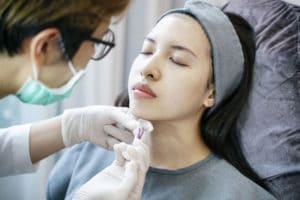 Another method of chin augmentation uses an injectable filler. Most fillers are temporary, with results lasting months to years. Common temporary fillers include hyaluronic acid and calcium hydroxyapatite preparations. Permanent fillers, like “free” silicone, have fallen out of favor due to the risk of migration, chronic inflammation and infection, which can permanently disfigure the chin

What is the surgical treatment like local or sedation?

Chin implant surgery is usually an outpatient procedure, performed using general anesthesia or local anesthesia with sedation. A small incision is made either underneath the chin or inside the mouth. Through this incision, the cosmetic surgeon creates space for the chin implant and fits it around the chin bone. Chin implant surgery alone typically takes less than 1 hour to perform; however, if you are having additional procedures, operating time will increase accordingly. Following surgery, the incision is closed with sutures and the chin may be bandaged.

There will be a moderate amount of swelling around the cheek area and possibly under the eyes. This peaks at 48 to 72 hours after surgery and then starts to subside. Crushed iced applied to the cheeks will help during this time. Most of the visible swelling will disappear by about 2 weeks. Plan for someone to drive you home from the center and to have someone stay with you for at least the first night once you’re home. Your surgeon will instruct you on which foods and medications to avoid before and after the surgery. If you smoke, your surgeon may ask you to quit smoking for a certain period before and after the procedure. On the day of the surgery, wear a loose blouse or shirt that does not have to be pulled over your face. Typically, recovery from a facial implant is quick. You should only need one week off from work at the most. Your actual recovery will depend on your personal habits and whether or not you’re having another surgery done at the same time.

How long does it take?

A cosmetic chin enlargement procedure is generally performed on an outpatient basis at the surgeon’s facility. The length of time the procedure takes depends on several factors, but is usually from 45 minutes to an hour and a half. Depending on the surgeon’s and the patient’s preference, local or general anesthesia may be used.

What are the complications?

Some of the potential complications that are specifically associated with cheek implant surgery include: Asymmetrical appearance of the face and cheeks. Capsular contracture, which is a rare complication characterized by the tightening of scar tissue around the implant and requires additional surgeries to correct. Change of sensitivity in the cheek area, though this usually returns to normal within a few months. Feeling unhappy with the results. Implant rejection, which occurs when the immune system reacts subsequent surgeries to correct. Bleeding, Bruising, Infection, Scarring, Swelling.

What can you do to speed up recovery?

Before your surgery, set up an area in your home for recovery. The area should include: Plenty of ice, Freezer bags,Ointments or creams as recommended by the surgeon for any external incision sites, Clean gauze, Soft foods, such as protein shakes, pudding, Jell-O, ice cream, Mouthwash (If you surgeon recommends not brushing your teeth while your face recovers). After the surgery, you will have bruising and swelling that can last at least two days. Your surgeon will let you know what to watch for as far as excessive or abnormal swelling or bruising.

Do you need to rest up afterwards and for how many days?

Most chin augmentation patients experience relatively little downtime and are back to desk work and most other daily activities within 7 days after surgery. Discomfort is typically minimal and easily controlled with pain medication or cold compresses.

You will need to sleep face-up, with your head elevated,  for a minimum of 1 to 2 weeks after surgery to help control post-op swelling and protect your healing incisions. Your  surgeon may also require you to consume a liquid-only diet for a day or two after surgery. Strenuous activities can typically be resumed within 3 to 4 weeks after chin augmentation. It is important to follow your cosmetic surgeon’s specific instructions during recovery to ensure that you heal well and your results look great as soon as possible. Results look close to final within one month after surgery, and are considered final after about 3 months, when residual swelling has subsided.