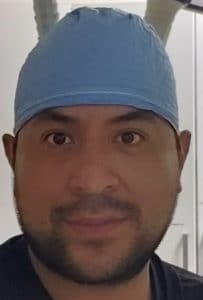 Bricio grew up in Downtown Los Angeles. He has two sisters and is very close to his mom. He attended highschool at Belmont High School. After graduating from highschool, he attended Emergency Medical Technician school. Once that was finished, he got interested in becoming a surgical technician. He started and finished his studies at American Career College. He has been working for three years and loves his job. What Bricio loves the most about working at Soma is his co-workers and the peaceful environment that it creates. Bricio also enjoys joking around with the surgeons to lighten up the day. After work Bricio unwinds by playing basketball and watching Netflix.